In the century since the arrival of Protestant missionaries, the church has been wiped out by genocide and forced to rebuild. Now “it’s time for the gospel to shine.” 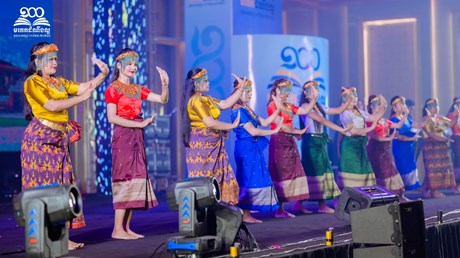 A festival celebrating the 100th anniversary of Protestant Christianity in Cambodia is coming up this weekend, and Navy Chann Chhay’s phone won’t stop dinging.

“Sorry, I have like ten Telegram messages coming in at the same time,” said Chhay, executive secretary on the committee planning the celebration, which local believers expect will be the country’s biggest Christian event ever.

The Cambodia Gospel Centennial Celebration is a two-day festival in Phnom Penh commemorating the arrival of the country’s first Protestant missionaries in 1923. Chhay and fellow Christian leaders have spent over two years planning the event.

During the final week of preparation, they have stayed in almost constant contact to ensure that every detail is perfect and the celebration’s vision statement is fulfilled: that Cambodia would become “the aroma of Christ in Asia and around the world.”

A large open-air exhibition area with an elaborate layout will welcome those who make the journey to the capital’s Diamond Island district, with zones for exhibitions, concerts and dances, children’s activities, food, and prayer. The main stage area is large enough to accommodate the 10,000-plus attendees who are expected each evening.

While there have been sizable Christian gatherings in Cambodia in the past, many have primarily been led and funded by organizations from abroad. For example, the Billy Graham Evangelistic Association held a rally in Cambodia in 2019, the organization’s first event in the Southeast Asian nation.

But this time, the driving force has been Cambodian believers themselves. Only three of the 18 members of the executive committee are foreigners, and about three-fourths …