With Russian peacekeepers distracted by war, Armenian activists, clergy, and officials debate how best to secure ancient churches and human rights in Artsakh. 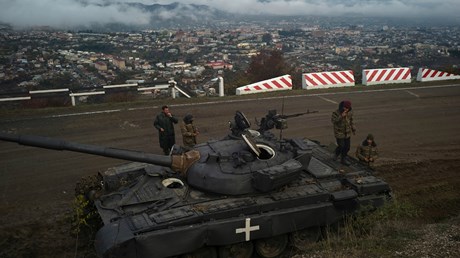 Suffering freezing temperatures during the long winter cold in the Caucasus Mountains, this month Armenians in Nagorno-Karabakh had no heating for three weeks. The natural gas “malfunction,” stated Azerbaijan’s state-run energy distribution company, has now been repaired.

It is not often that pipeline maintenance draws international concern.

The European Union and Freedom House both called for quick resumption of the supply in order to avert a humanitarian crisis. Over 100,000 residents in the contested enclave rely on Armenian natural gas that passes through Azerbaijani territory.

Nagorno-Karabakh, which Armenians call Artsakh, lies within the internationally recognized territory of Azerbaijan. Armenians accused Azerbaijan of deliberate disruption, prevention of repair, and installation of a new valve with which they can shut off gas flow at will.

Secured by Armenians backed by Armenia’s military following the fall of the Soviet Union, Artsakh sought independence for three decades while controlling six buffer zones in depopulated Azerbaijani lands. Negotiations failed to resolve the dispute, until Azerbaijan launched a 44-day war in 2020 that recovered significant territory.

Yet skirmishes continue, and Azerbaijan accuses Armenia of instigation. Last November, Armenia stated an Azerbaijani incursion occupied 15 square miles of sovereign territory. Christianity Today was reporting from one of the liberated buffer territories at the time.

And in the month prior to the pipeline issue—with the world’s attention focused on Ukraine—Russia officially accused Azerbaijan of breaking the terms of the ceasefire. Monitors recorded at least four …