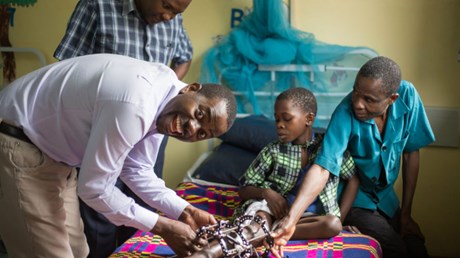 Tongai Chitsamatanga just finished treating an 8-year-old with dislocated hips, two children with bone infections, and another two with clubfoot.

It’s hard work, requiring great patience and greater skill. The 41-year-old doctor could be earning a lot more for his expertise at his old hospitals in Oxford and Derby, United Kingdom. But instead he is here, in Bulawayo, Zimbabwe, in a 13-bed children’s hospital that opened in April 2021.

He personally doesn’t think the decision is that hard to explain, though.

“To me that is practical Christianity,” Chitsamatanga told CT. “Rather than saying you’re Christian and having nothing to show for it.”

Chitsamatanga is one of just two pediatric orthopedic surgeons in a country of more than 15 million. The other, his colleague Rick Gardner, is an expatriate.

The two work at CURE Zimbabwe, the only place in the country offering care for children with complicated conditions such as clubfoot, knock knees, and bowed legs. The newly opened children’s hospital, which has three operating theaters and an outpatient clinic, is one of eight that the Christian nonprofit CURE International operates around the world.

Poor pay and working conditions have triggered an exodus of qualified health workers from Zimbabwe. More than 2,200, including doctors, nurses and pharmacists, left government service last year, according to the government's Health Services Board. The figure is more than double that of 2020, and nearly triple that of 2019.

Last July, the city of Harare announced that 240 nurses had left its service and in October local reports said nine clinics had closed due to staff shortages.