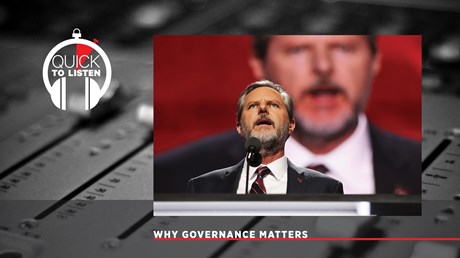 Jerry Falwell Jr. resigned as president of Liberty University on Monday. The news came after Reuters reported that a friend and business partner of the couple had sex with Becki Falwell while Jerry Falwell Jr. watched. Falwell Jr. himself submitted his resignation only to reverse course twice.

Falwell Jr. was already on an indefinite leave of absence after he posted a picture on Instagram of him posing with his arm around a woman at a party with their zippers down and midsections exposed.

With one notable exception, Liberty’s board has stayed largely silent in the wake of Falwell’s increasingly controversial public statements and financial dealings.

For ministry boards that have run into moral or ethic issues with their CEOs, one common mistake is allowing the CEO to recommend too many board members, says Bob Andringa, the managing partner of the Andringa Group who specializes in governance and the relationship between boards and chief executives.

“Who's a CEO going to recommend? They’re going to recommend friends,” said Andringa, who has written several books on board governance, including The Nonprofit Board Answer Book and Good Governance for Nonprofits. “And so when it comes down to crunch time, those friends have more loyalty to the CEO than they do to the mission of the whole organization.”

Andringa joined global media manager Morgan Lee and editorial director Ted Olsen to discuss the blind spots of Christian boards, what encourages and discourages them in holding leaders accountable, and why more retired people should serve on boards.

What is Quick to Listen? Read more