Pew: Of 34 nationalities, Americans have declined the most in connecting belief in God to morality. 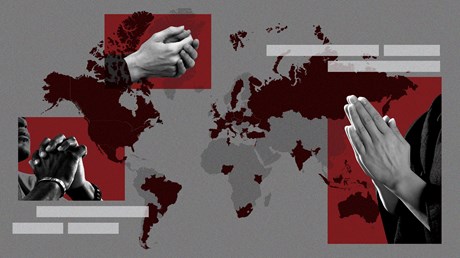 The personal importance of faith is increasing in much of the world, according to a survey of more than 38,000 people across 34 countries spanning 6 continents.

In an analysis released this week, the Pew Research Center found that 61 percent of respondents to its Global Attitudes Survey last year agreed that “God plays an important role” in their lives. Similarly, 62 percent said religion is very or somewhat important in their lives. [Note: Percentages are medians based on the 34 countries.]

The proportion of people who say religion is “very important” in their lives is rising in 19 countries, and nearly across the board in the Global South, including Argentina, Brazil, India, Indonesia, Kenya, Nigeria, and the Philippines.

Religiosity is particularly vigorous in the Middle East. Since 2007, Lebanon has seen an increase of 20 percentage points in residents who say religion is “very important” in their lives, from 50 percent to 70 percent. In Israel, barely a quarter of residents said religion was “very important” in 2007. Last year, 39 percent agreed.

For instance, Germans who place high importance on religion have grown since 2002, as have those who give it no importance. Greeks and Dutch exhibit the same subtle shift away from moderate views on religion toward the two poles.

Of the 34 countries surveyed, lukewarm perspectives on religion have decreased in 24 countries in favor of stronger views on the importance …