As Turkish president Erdoğan joins hundreds in celebration, Christians in the diaspora mourn their lost homeland and cultural heritage. 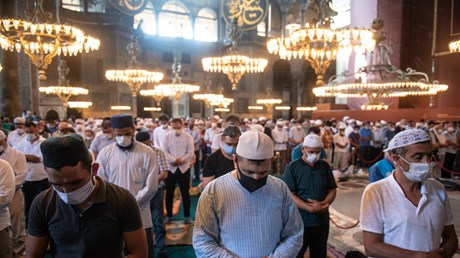 Following his decree earlier this month, Turkish President Recep Erdoğan’s joined a coronavirus-limited 500 worshipers to perform Friday prayers in the sixth-century Byzantine basilica, underneath the covered frescoes of Jesus and the Virgin Mary.

International condemnation resounded after the Turkish Council of State ruled to revert the UNESCO World Heritage Site back to its Islamic status. Conquered in 1453 by Ottoman sultan Mehmed II, the massive church was turned into a museum by the founder of the modern Turkish republic, Kamal Ataturk, in 1934.

Underreported in much of the criticism was a wider complaint.

“The action of the Turkish government evokes heavy memories on the desecration and destruction of holy sites of the Armenian people and other Christian nations by the Ottoman government for centuries,” said Garegin II, Supreme Patriarch and Catholicos of All Armenians.

There are an estimated 11 million Armenians worldwide, including 3 million in their modern nation-state.

Representing the diaspora from the Holy See of Cilicia, in Lebanon, Catholicos Aram I went into more detail.

“Soon after the Armenian Genocide, Turkey confiscated thousands of Armenian churches and transformed them into bars, coffee shops, and public parks,” he said, “ignoring the reactions and appeals of the international community.”

As Erdoğan is doing again now—and not just to the Hagia Sophia.

Turkey has assured the frescoes will be uncovered for all visitors (3.7 million last year) outside of prayer times—and now without a museum entry fee. More than 400 other churches continue to …