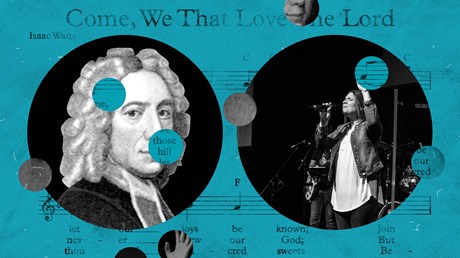 The church has forgotten the old hymn “Come, We That Love the Lord.” I’ve never heard this song in any worship service and I’ll bet you haven’t either. Try to hum the opening line.

Of course a lot of hymns are forgotten, but this was Isaac Watts’s biggest hit—more widely published than anything else he wrote. Today, Watts’s most popular hymns are “When I Survey the Wondrous Cross” and “Joy to the World.” Many churches also occasionally sing a short catalog of his other work: “Alas and Did my Savior Bleed,” “Jesus Shall Reign Where’er the Sun,” “O God our Help in Ages Past,” and “There is a Land of Pure Delight.”

Some of Watts’s hymns are rightly forgotten. He wrote many, and some have not stood the test of time. I know that as part of the worship team at Redeemer Church in Nottingham, England, I wouldn’t ask my church to sing “Blest Is the Man Whose Bowels Move.” It doesn’t hold up today.

But “Come, We That Love the Lord” should still be sung. It’s an amazing hymn, and it exemplifies the best of what Watts did and why he was regarded for so long as the father of English hymnody. The hymn was published in more than 1,600 hymnals from the time he wrote it in the 1700s until we stopped singing it—for some reason—in the 20th century.

This hymn puts Christ at the center of our worship. It understands the importance of human affections in worship and weaves Scripture together with a pastoral concern for songs of hope. Finally, it points Christians to the day they will be united with Christ. This is what we want in our worship.

It starts out simple, …