The Oxford scholar reflects on the interface between faith and science and how narratives draw us toward belief. 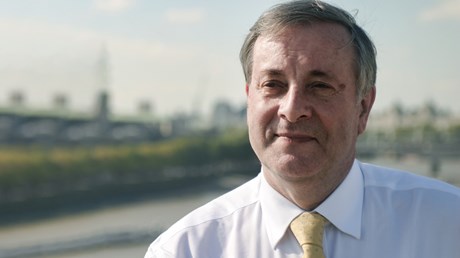 The relationship between Christianity and science is hotly debated, and both believers and skeptics have appealed to Albert Einstein to buttress their positions. Believers point to Einstein’s many references to God while skeptics note his rejection of revealed religion. Alister McGrath, Andreas Idreos Professor of Science and Religion at Oxford University, has written a new book on the famous physicist, A Theory of Everything (That Matters): A Brief Guide to Einstein, Relativity, and His Surprising Thoughts on God (Tyndale).

McGrath also recently published Narrative Apologetics: Sharing the Relevance, Joy, and Wonder of the Christian Faith (Baker), in which he argues that stories are an important but often overlooked resource for commending Christianity. In both books, he contends that the Christian faith has a better story to tell than secular alternatives and offers great explanatory power.

Christopher Reese spoke with McGrath about the interconnected topics of faith, science, and apologetics.

You stress in A Theory of Everything (That Matters) that Einstein sought to integrate his scientific knowledge with religion, philosophy, and other disciplines. What can we learn from Einstein’s approach to seeing the bigger picture of reality?

Einstein is emphatic that science is only able to give a partial account of our complex and strange universe. It may help us to understand how our universe functions, but it does not engage deeper questions of meaning and value. For Einstein, it was essential to have a rounded view of this matter, enabling reflective human beings to appreciate new insights into the structure and functioning of the universe, working out what is good and trying to enact this in their lives, and finding …