Blurring the line between good and evil happens in all human hearts. 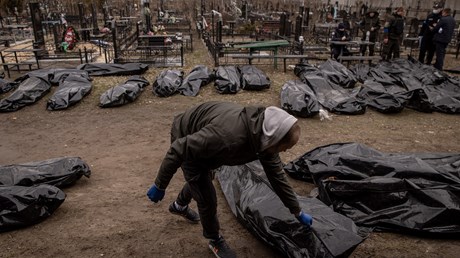 This piece was adapted from Russell Moore’s newsletter. Subscribe here.

The Western world said “Never again” after the gas chambers of the Third Reich—and yet here we are.

Russian troops deployed by war criminal Vladimir Putin are committing atrocities across Ukraine, murdering innocent civilians in cold blood as they move from invasion to occupation to attempted genocide. One of the reasons it’s difficult to see the images of these slaughtered innocents is because most people wonder, “What can we do to stop it?”

While the Ukrainians have shown grit and valor beyond what anyone could have predicted, by all accounts there is still a long slog ahead. The war crimes will continue.

Perhaps, somehow, this invasion will be stopped quickly and the Russian war criminals will be brought to justice in a Nuremberg-style trial, as Ukrainian president Volodymyr Zelenskyy has called for.

But if not, these murders and crimes may not be called to an account for a long time—maybe even a lifetime. In fact, that’s what the war criminals are counting on.

The world should watch what these criminals are doing—to call it what it is and hold them to account whenever the time comes. But Christians in particular should watch and recognize something we often want to ignore: how the human heart can justify great evil.

Human beings are capable of horrific depravity. This we know. Humans, however, are not like wild animals or constructed machines. We have consciences that alert us to what sort of people we are becoming. To carry out criminality of this degree, a Russian soldier must somehow learn to silence that conscience—or at least muffle it.