From preparing food to Molotov cocktails, Christian women contribute to resistance while some fear the divide between those who stayed and those who fled. 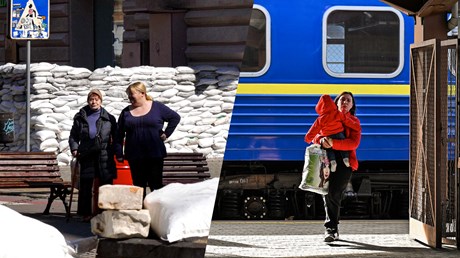 Of Ukraine’s more than 4 million refugees, 90 percent are women and children. Of the 6.5 million internally displaced Ukrainians, 54 percent of adults are women. Men ages 18-60 are required to stay and resist the Russian invasion. And thus it is men who usually tell the public tales of war.

Women are often kept to private forums, such as their journals. Including:

Fall asleep while checking the news on your phone.

Wake up from a nightmare and remember it is not just a bad dream.

Check your phone with the thought: I hope everyone I love is alive.

Kiss a sleeping husband thinking about the fragility of life.

Wash your face. Put your clothes on.

Go to work. Wear a smile as a mask. Distance your emotions from pain. Physically hear pain turn into white noise in your head.

Check on your family during a 15-minute break at work. Cry on your break.

So began the March 27 entry of Tetiana Dyatlik Dalrymple, suffering vicariously from afar in Washington, DC. Her father, Taras, sensed that such female perspectives have been missing from coverage of the war.

As regional director for Eastern Europe and Central Asia for Overseas Council, he recruited six Ukrainian women leaders who could tell their story. In partnership with the Eastern European Institute of Theology, ScholarLeaders International, and four affiliated seminaries, they sought to correct the critical observation of Svitlana Alexievich, a Belarussian novelist who won the Nobel Prize for literature in …