Middle Eastern and European evangelicals assess the vastly different continental response and the Bible’s teachings toward the stranger. 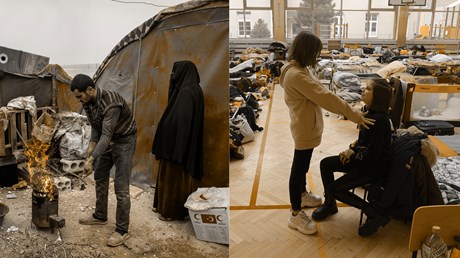 As Ukraine continues to be battered by Russia, Syrian refugees are praying.

“This is what happened to us,” said refugee students at the Together for the Family center in Zahle, Lebanon. “We don’t want it to happen to others.”

Born in Homs, Syria, to a Baptist pastor, Izdihar Kassis married a Lebanese man and then founded the center in 2006. She shifted her ministry to care for “her people” when the Syrian civil war started in 2011. About 50 traumatized teenagers find counseling there every year, and 300 have graduated from the center’s vocational programs.

As the refugees discussed the “horrible” situation in Europe during the weekly chapel service, Kassis suggested intercession. Bowing their heads, the 40 children and 30 Syrian staff and volunteers knew better than anyone what to ask for.

But one child wanted to be sure the Ukrainians would know of their solidarity. He went outside into the cold and snow of the Bekaa Valley, where most of Lebanon’s 1.5 million Syrian refugees take shelter.

Since the invasion, about 4 million of Ukraine’s population of 43 million have become refugees. Another 6.5 million are internally displaced.

Yet 11 years since its civil war, most of Syria’s 6.8 million refugees—out of a population of 20 million—still live in limbo. Europe largely shut its doors, certainly in comparison to its warm welcome of those fleeing Russian aggression.

Many have taken offense.

“There is the perennial double standard and selective outrage of global news media, Western governments (and, sadly, even Western Churches) when it comes to reporting on wars, conflicts and the plight …