With their overlapping views with conservative Catholics, not having a seat on the bench may not matter much. 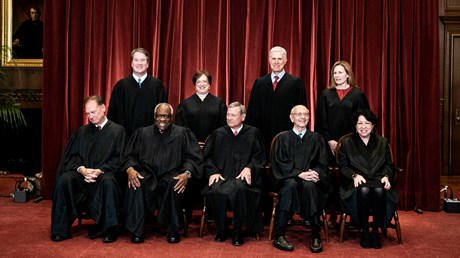 With the nomination of Judge Ketanji Brown Jackson last month, the US Supreme Court could get its first Black female and first nondenominational Protestant justice.

Six of the current Supreme Court justices are Catholic (Samuel Alito, Amy Coney Barrett, Brett Kavanaugh, John Roberts, Sonia Sotomayor, and Clarence Thomas), and with Stephen Breyer’s retirement, Elena Kagan will be the only Jewish justice. In response to a question during her confirmation hearings on Tuesday, Jackson described her faith as “Protestant” and then added “nondenominational.”

When Judge Neil Gorsuch was confirmed to the US Supreme Court in 2017, he ended a seven-year stretch when no Protestants sat on the nation’s highest court for the first time in history. Of the 115 justices appointed to the Supreme Court since 1789, the overwhelming majority have been Protestants, but none have identified as nondenominational or evangelical.

“Since the rise of politically active evangelicals in the 1970s, not a single evangelical has served on the Supreme Court,” Dan Crane, Frederick Paul Furth Sr. professor of law at University of Michigan, told Christianity Today. “It’s not that they don’t care about the court, but they haven’t served on the court.”

The high court’s decisions on abortion and school prayer helped galvanize the Religious Right, but conservatives have focused more on outcomes than the identities behind the bench.

“Activism is usually mentioned as one core distinctive of being an evangelical, but we oppose it on the bench,” CT observed in 2006. “Is this why there are so few top-level evangelical judges?”

The lack of evangelicals on the Supreme …