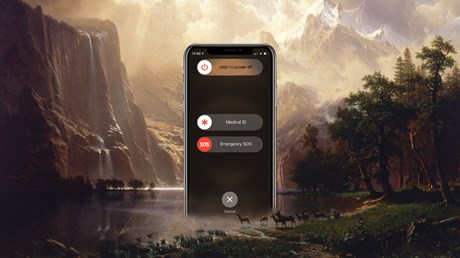 Scrolling through Twitter on my train commute home, I came upon a photo of an odd-looking phone—matte black and paperwhite. A former coworker of mine had been using the low-tech phone, called a “Light Phone,” for about year. I was fascinated because I had been thinking about ditching my smartphone altogether. The post unintentionally revealed a felt need. After a few days of watching product review videos, I placed my order.

I bought my first cellphone in my mid-30s when we moved to the New York City area 11 years ago, where I still work as a college professor. It was a “dumb phone” that lived mostly in my backpack. I eventually eased into a refurbished iPhone about six years ago. The iPhone eventually moved from my backpack to my front left pocket. I never put social media apps on it—just email and a web browser. Recently, I added a mindless brick-smashing game and used it often to divert my attention on the train ride home.

I’m familiar with the pangs of addiction. I used to smoke two packs of cigarettes a day for ten years. In addiction’s loving arms, I couldn’t go long without a hit. Fifteen or 20 minutes after my last drag, my anxieties would crescendo to a frenzied need for relief. My entire being grew restless until it found its rest in smoke—40 times a day. It was exhausting.

Making myself still, mentally or physically, has always been hard for me. I often have many irons in the fire. But maintaining the discipline of stillness requires a certain level of security with oneself and with God. My smartphone, on the other hand, offered an all-too-easy way to focus my constant motion, without truly slowing me down.