Churches in the “Wheaton of Ukraine,” a suburb of Kyiv, help residents escape war as one member gives his life trying to save a fleeing family. 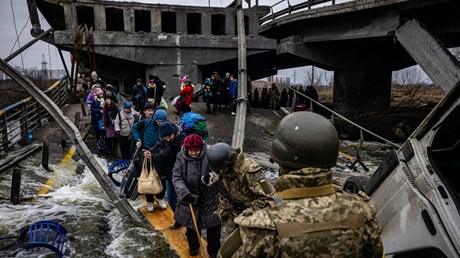 Anatoly, a 26-year-old member of Irpin Bible Church, is with the Lord.

His last act on earth was to carry the suitcase of a young mother and her two children, hurrying them across Irpin’s collapsed bridge to safety from Russian shelling.

All four died when a bombshell landed in the middle of their would-be humanitarian corridor. Eight total died in the suburb of Kyiv yesterday, as Russian troops pressed hard to encircle the Ukrainian capital.

“Anatoly was deeply spiritual, with a good Christian character,” said his pastor, Mykola Romanuk. “When he saw a need, he tried to help.”

Negotiations over the weekend led to several ceasefires for civilian evacuation, which were quickly broken. Each side blamed the other, and Russia has denied targeting civilians.

But Ukrainian sources describe cities now littered with bombed schools, hospitals, and residential districts—not least in Irpin, known in evangelical circles as the “Wheaton of Ukraine.”

After the fall of the Soviet Union, Ukraine’s “evangelical patriarch” Gregory Kommendant invited Christian ministries to join him in his hometown, 16 miles northwest of the capital, where he served as president of the All-Ukraine Baptist Union.

As of a few days ago, about 25 ministries operated out of Irpin, including Child Evangelism Fellowship, Youth With a Mission (YWAM), Youth for Christ, the International Fellowship for Evangelical Students, and Samaritan’s Purse.

Once home to a single evangelical church, Irpin now boasts 13.

“We were here for 20 years, and neighbors never set foot in our church,” said Romanuk. “Now they are living in our basement, praying with us, and have become our friends.”