Proprietary gifs may seem silly, but Christians have reasons to think about digital ownership. 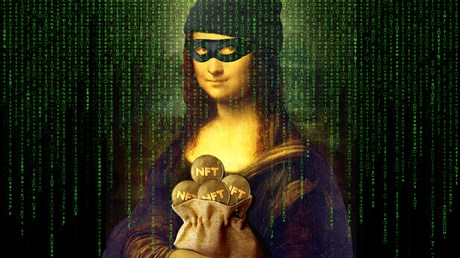 “Why would I buy a jpeg I can copy and paste for free?”

That is how most conversations about NFTs (non-fungible tokens) begin. And it makes perfect sense. People are purchasing NBA clips for thousands of dollars—which can be streamed without cost on YouTube.

“Crypto degens” are changing their Twitter profile pictures to pixelated cryptopunks to signal their membership in a new libertarian world order. As the NFT market soars to a value of $7 billion, it’s been compared to the dot com bubble, where speculation-fueled investment flooded the market.

Gates tried to explain the difference between radio and the internet by pointing out that baseball fans could listen to the game whenever they want, not just live. But Letterman wasn’t impressed—“Do tape recorders ring a bell?” he asked.

Or recall the time when Katie Kouric and the entire Today Show crew made fun of “@” symbols and asked, “Can you explain what internet is?” Or remember Newsweek’s notorious 1995 editorial headline that read, “The internet? Bah!”

Christians especially did not begin to think seriously about the internet (or its successor, social media), until well after they were adopted at a popular level. Pastors did not prepare their congregations for the promises and pitfalls of the web. This left Christians caught up in the cultural tide, lacking discernment and wisdom …