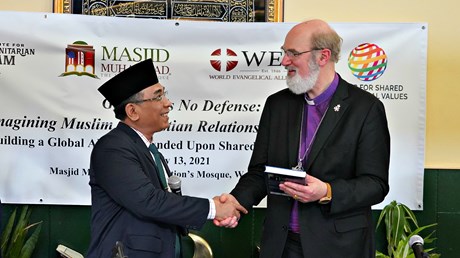 The world’s largest Muslim organization accepts that Christians will try to convert its members. A new partnership with evangelicals seeks to ensure this does not lead to conflict.

Last week, the World Evangelical Alliance (WEA) signed a statement of cooperation with Nahdlatul Ulama (NU), an Indonesian association with an estimated 30 million to 50 million members. Established in 1926 to counter Wahhabi trends issuing from the Arabian Peninsula, its name means “Revival of the Religious Scholars.”

“Evangelicals very much aspire to proselytism, and so does Islam. So naturally there will be competition,” said NU secretary general Yahya Cholil Staquf. “But we need to have this competition conducted in a peaceful and harmonious environment.”

Staquf spoke from the stage of the 2021 International Religious Freedom (IRF) Summit in Washington. On its opening day, he and WEA secretary general Thomas Schirrmacher signed “The Nation’s Mosque Statement,” along with Taleb Shareef, imam of Masjid Muhammad, the first American mosque built by the descendants of slaves.

Calling for “the emergence of a truly just and harmonious world order,” the statement seeks a global alliance to prevent the political weaponization of identity and the spread of communal hatred.

Schirrmacher called the WEA’s cooperation with NU the product of deep theological dialogue, counter to the academic tendency to downplay truth claims. And as evangelicals, evangelism is at the heart of their effort.

“We are working together for the right to convert each other,” the German theologian said.

“Religious freedom does not mean that we agree, but that we live in peace with our deep differences.” …