With an activist in jail and a grandmother humiliated, religious freedom advocates weigh the value of progress in church legalization and public rhetoric. 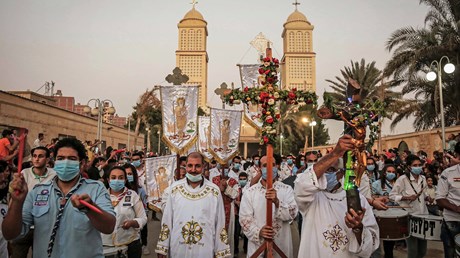 Egyptian Christians have long struggled to build their churches.

But now, they can have Muslim help.

Last month, Egypt’s Grand Mufti Shawki Allam issued a fatwa [religious ruling] allowing Muslim paid labor to contribute towards the construction of a church. Conservative scholars had argued this violated the Quranic injunction to “not help in sin and rancor.”

The ruling is timely, as the Council of [Government] Ministers recently issued an infographic highlighting the 2020 land allocation for 10 new churches in 8 Egyptian cities. An additional 34 are currently under construction.

And prior, two prominent examples stand out. In 2018, President Abdel Fattah al-Sisi inaugurated the Church of the Martyrs of Faith and Homeland in al-Our village in Upper Egypt, to honor the Copts beheaded by ISIS in Libya. And in 2019, he consecrated the massive Cathedral of the Nativity of Christ in the to-be new administrative capital of Egypt, alongside its central mosque.

This is in addition to restoration work at 16 historic Coptic sites, and further development of the 2,000-mile Holy Family trail, tracing the traditional map of Jesus’ childhood flight from King Herod.

And since the 2018 implementation of a 2016 law to retroactively license existing church buildings, a total of 1,800 have now been registered legally.

“Persecution” has long been a term applied to Copts in Egypt, ranked No. 16 on the Open Doors 2021 World Watch List of nations where it is hardest to be a Christian.

But shortly after the mufti’s fatwa, which restated a ruling last given in 2009, the Grand Imam of al-Azhar gave a pronouncement of his own.