Evangelicals pray for peace after three were killed at a Catholic church in Nice, the third incident in recent months attributed to Muslim extremists. 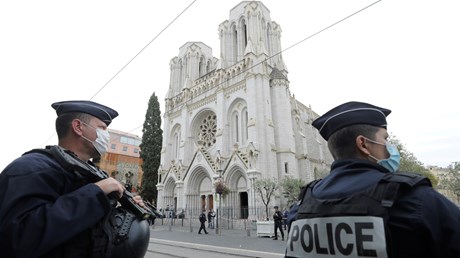 French evangelicals are mourning along with the Catholic church and the rest of the nation after an attacker armed with a knife killed three people Thursday at a basilica in the Mediterranean city of Nice.

“Let us be peacemakers in a French society that lacks it. Pray for our fellow citizens, whatever their religion. Let us love our neighbors, as Jesus ordered us to do,” stated the National Council of Evangelicals of France (CNEF), citing Matthew 5:9.

Police in Nice have closed all places of worship in the city, and the evangelical group advised pastors across the country to heed government recommendations to heighten security due to the threat of further violence.

The incident at Notre Dame Basilica in Nice was the third attack in two months in France that authorities have attributed to Muslim extremists, including the beheading of a teacher.

It comes amid a growing furor over caricatures of the Prophet Muhammad that were republished by the satirical newspaper Charlie Hebdo—renewing vociferous debate in France and the Muslim world over the depictions that Muslims consider offensive but are protected by French free speech laws.

Other confrontations and attacks were reported Thursday in the southern French city of Avignon and in the Saudi city of Jiddah, but it was not immediately clear if they were linked to the attack in Nice.

“He cried ‘Allah Akbar!’ over and over, even after he was injured,” said Nice Mayor Christian Estrosi, who told BFM television that two women and a man had died, two inside the church and a third who fled to a nearby bar but was mortally wounded. “The meaning of his gesture left no doubt.”

Christian leaders across France responded by crying out to God …