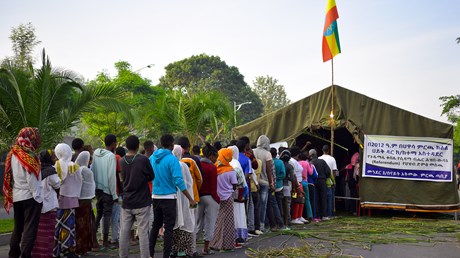 Across the highland region famed for its flavorful coffee exports, voters lined up as early as 4 a.m. on November 20, smiling and waving their green identification cards.

“For the last two months, the church was praying and fasting daily,” said Tessema Tadesse, pastor of a Kale Heywet church in Hawassa, the capital of Sidama. “And on Sunday, the preaching was around peace, love, and embracing others.”

Kale Heywet (Word of Life) is one of Ethiopia’s largest “Pente” or evangelical denominations, with approximately 1,000 congregations in Sidama alone. (Though Pente, pronounced Pent-ay, originated as an Ethiopian term for Pentecostals, it has come to refer to most non-Orthodox Christians, with the closest US equivalent being evangelical.)

Evangelicalism in Ethiopia originated in Sidama, where 87 percent of the population self-identified as Protestants in the 2007 census. Overall, in Africa’s second-most populous nation, evangelicals only comprise about 19 percent of Ethiopia’s 112 million people, while the Ethiopian Orthodox Tewahedo Church comprises about 40 percent, according to the World Christian Database.

“We believe we can understand the Bible, in the priesthood of all believers,” he told CT. “That narrative might have made them think more about the individual.”

Even so, religion was not the source of this political …