Chain reaction explosions clear path to the churches on Israel’s side of John the Baptist’s Jordan River ministry. 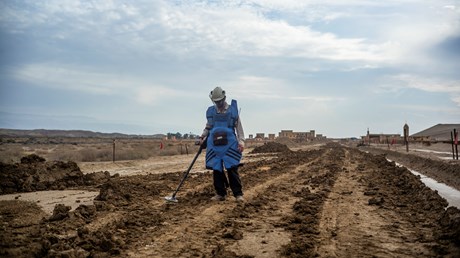 For over 50 years, Jesus’ baptismal site was a casualty of war.

Now, it is a casualty of the new coronavirus.

“We got the churches together, all eight different denominations, and then we got the Israelis and the Palestinians,” HALO Trust CEO James Cowan told the BBC.

“So all three major faiths, and we looked at how we could do this.”

Located six miles east of Jericho on the Jordan River, “Bethany beyond the Jordan” in 1968 was placed by Israel under military jurisdiction following the Six Day War. Fearing terrorist infiltration across the shallow riverbed, the army laid over 6,000 landmines and booby-trapped the churches.

Israel declared peace with Jordan in 1995, but the area remained closed.

In 2011, it was partially reopened, allowing access along one narrow path between the Jordan River and the Greek Orthodox St. John the Baptist Monastery.

And in 2016, HALO Trust, which works in 27 nations around the world, announced it would begin demining efforts. Funding issues caused a two-year delay.

Significant progress began in March 2018, after securing the necessary $4.6 million ($2 million of which was provided by the Israeli government).

By year’s end, CT reported that 800,000 pilgrims visited the not-yet-fully-demined complex. In 2019, CT reported how Christian rapper Lecrae was one of them and provided information on the ecological concerns surrounding the Jordan River.