The controversial Church of Bible Understanding lost accreditation several years ago for unsanitary conditions at the facility. 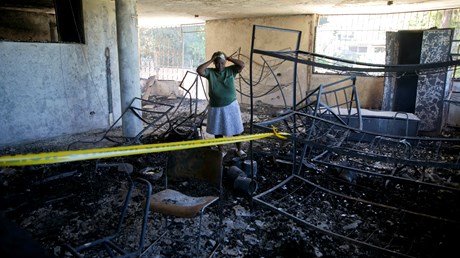 Rose-Marie Louis, a child-care worker at the home, told The Associated Press that the fire began around 9 p.m. Thursday and firefighters took about 90 minutes to arrive. The orphanage had been using candles for light due to problems with its generator and inverter, she said.

About half of those who died were babies or toddlers and the others were roughly 10 or 11 years old, Louis said.

Late Friday afternoon, police raided another home also run by the Church of Bible Understanding and took away several dozen children in a bus over protests from employees.

The fire happened at the group’s orphanage in the Kenscoff area outside Port-au-Prince, the Haitian capital.

“It could have been me,” said Renadin Mondeline, a 22-year-old who lived in the home with her son, now 6, for about two years until she started making enough money as a street vendor to start renting her own place to live last year. “These little girls inside were just like my baby.”

Rescue workers arrived at the scene on motorcycles and didn’t have bottled oxygen or the ambulances needed to transport the children to the hospital, said Jean-Francois Robenty, a civil protection official.

“They could have been saved,” he said. ‘‘We didn’t have the equipment to save their lives.’’

The Associated Press has reported on a long-standing series of problems at the two children’s homes run by the Church of Bible Understanding.

“‘We are aware of the fire in the children’s home in Haiti,” said Temi J. Sacks, a spokesman for the group, …