Another Boko Haram captive in Nigeria is forced to plead for his life yet is at peace with death. 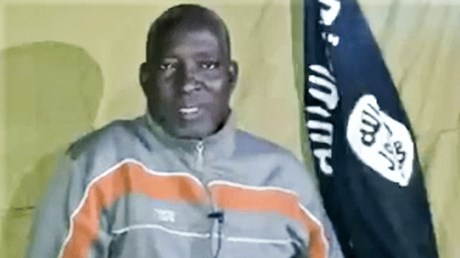 A hostage video released last week by Boko Haram did far more than issue another Nigerian plea for rescue.

It revealed a modern-day Shadrach.

“By the grace of God, I will be together with my wife, my children, and my colleagues,” said Lawan Andimi, a Church of the Brethren in Nigeria (EYN) pastor in the troubled northeastern state of Adamawa. “[But] if the opportunity has not been granted, maybe it is the will of God.

“Be patient, don’t cry, don’t worry. But thank God for everything.”

It is testimony even to his captors, said Gideon Para-Mallam, the Jos-based Africa ambassador for the International Fellowship of Evangelical Students (IFES).

“This is completely different from most hostage videos,” he said. “[Andimi] appeared as one who has already conquered death, saying to his abductors and the rest of us that he is ready to die for his faith in Christ.”

Andimi’s home area of Michika was attacked by armed terrorists the evening of January 2. Local residents fled into nearby bushes and hills.

“Our people had to run helter-skelter when they heard that the terrorists were approaching the town,” Zakariah Nyampa, a member of Nigeria’s parliament representing the Michika area, toldMorning Star News, noting that the army killed several attackers.

“We thank God for their lives, but the only civilian casualty is the missing pastor whose whereabouts are still unknown.”

Para-Mallam believes Andimi was deliberately targeted. Well-known in the area, the pastor was also the EYN district leader and the regional representative of the Christian Association of Nigeria (CAN).

“To annihilate the Christian faith, there is no better way than to eliminate …