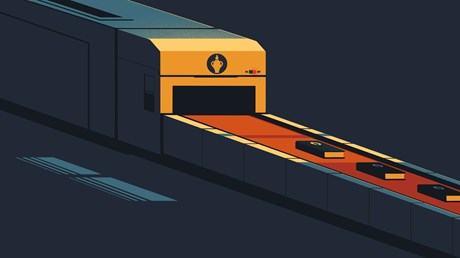 Wayne Cox started printing Bibles when he was 17. The first day he walked into the Philadelphia printing plant, he saw a sign on top of the building that said, “Since 1863.” That was during the Civil War, he thought. That was a long time to be printing Bibles.

Cox started as floor help, hoisting big rolls of paper into the industrial printers. It was a young man’s work. He was promoted to roll man, checking the tension of the ultrathin paper as it ran through the presses. It was the delicate tradecraft of a Bible printer. Then Cox became a second pressman, and then first pressman, in charge of everything. It was work you could be proud of.

“The Bibles we printed were in all the hotels,” he said. “If someone wanted to take the Bible, the Gideons said to take them, and we’d print more.”

At the end of 2019, after 46 years printing Bibles, Cox was laid off, along with more than 170 other printers. The LSC Communications plant—one of the sites printing Gideons International Bibles in the US—was closed as the ministry cuts back on Scripture production.

Gideons is almost synonymous with Bibles. It has distributed more than two billion, giving them away in hotels and hospitals, as well as at high schools, colleges, fairs, festivals, train stations, prisons, military bases, and on public streets. The Gideons Bible is a pop culture icon, even earning a line in the Beatles’ White Album, when Paul McCartney sang, “Rocky Raccoon checked into his room / only to find Gideon’s Bible.”

But now the 122-year-old ministry is changing. Over the past three years, Gideons has reduced its spending on Scripture production by about $10 million per year, financial records …