Leah Boyd represents a new generation of women in ministry, bringing a sense of humor and hope to theological debates. 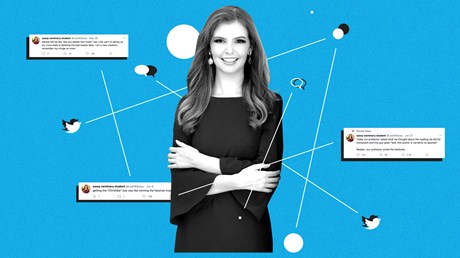 Going to seminary was Leah Boyd’s “Plan F.” A music education major, performer, and pageant winner, she had planned on becoming a professional opera singer. But now Boyd’s seminary education has become the most prominent thing about her—at least among the 16,000 followers who know her as “Sassy Seminary Student,” @LeahBSassy on Twitter.

The Mississippi State University alumna and student at Baylor University’s Truett Seminary shares reflections on theology, evangelical culture, and gender dynamics with one-liners, pop culture riffs, and memes through her popular account, which launched in February 2020.

“How I, a seminary student, know exactly how to fix every issue in the church today and I can’t believe no one has thought about this stuff before: a thread 1/245,” read one sarcastic tweet.

Sassy Seminary Student began as a way to inject humor into online evangelical debates, and her approach worked, boosted by her sharp wit, Gen Z sensibilities, and lighthearted approach to everything from politics to contemporary worship.

Boyd responded to a new Christian dating site that dismissed singleness as a gift and promoted women’s dominion as “housemakers and helpmates” with a picture of her dressed as a “a docile 1 corinthians 11 woman” in a long dress and shawl.

And, of course, her tweets reference telltale markers from church and youth group culture.

As a recent seminary graduate, I see her as representing a larger trend: While many of our predecessors in theological education had to fight to be taken seriously in evangelical spaces, sometimes the only one or …