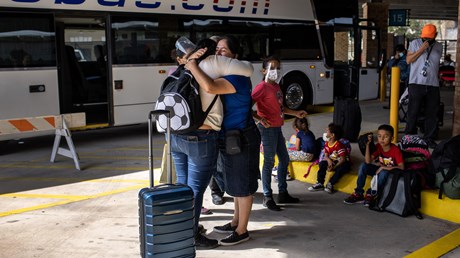 When the Honduran woman got to Alma Ruth’s studio apartment in McAllen, Texas, she took a shower.

She was nine months pregnant, and it was the first real shower she’d taken in more than a year and a half, since a day in 2019 when she and her husband and their toddler fled the violence that has wreaked havoc on Central America.

She thanked God for the clean, hot water, and for the people who had helped her along the way.

“God is always surprising us with his miracles,” she told CT in Spanish. “The rest of my life will not be enough time to thank him for all the miracles he has done for my family and for me.”

The woman, allowed into the US in March, is one of an estimated 68,000 asylum seekers who now have permission to wait for their court hearings in the United States, as President Joe Biden reversed Donald Trump’s “Migration Protection Protocols.”

The former president’s policy, known as MPP or the “Remain in Mexico” policy, was suspended in January. The Biden administration officially ended it last week in a victory for asylum seekers—including the woman taking the shower, who asked that her name not be used because her asylum case is still pending—and their advocates, like the shower’s owner, Alma Ruth.

But Ruth, founder and president of Practice Mercy, is worried about the new challenges asylum seekers will now face.

“They finish one Via Dolorosa,” she said, using the Spanish phrase for the “path of sorrow” that Jesus took on the way to the cross, “and they start another one.”

The migrants in the makeshift refugee camp in Matamoros found themselves in a kind of no man’s land, neither “here” …