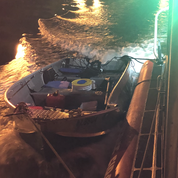 Two men enjoying a late night of fishing made a harrowing escape when they were forced to abandon their boat and jump into a canal just before their boat collided with another vessel in Dania Beach early Saturday.

Broward Sheriff Fire Rescue spokesman Michael Kane said the unidentified men, both in their 20’s were fishing on a 10-foot Jon Boat shortly after 1 a.m. when a 21-foot center console vessel approached them in the darkness.

The two men in the Jon Boat were forced to jump into the water just before their boat was struck by the larger vessel. The impact caused considerable damage to the Jon Boat which left the men stranded.

Broward Sheriff Fire Rescue’s Fire Boat responded to the scene and rescued the two men — who were not injured — and safely towed their boat to the Harbor Town Marina. Florida Wildlife Commission officers will continue the investigation.