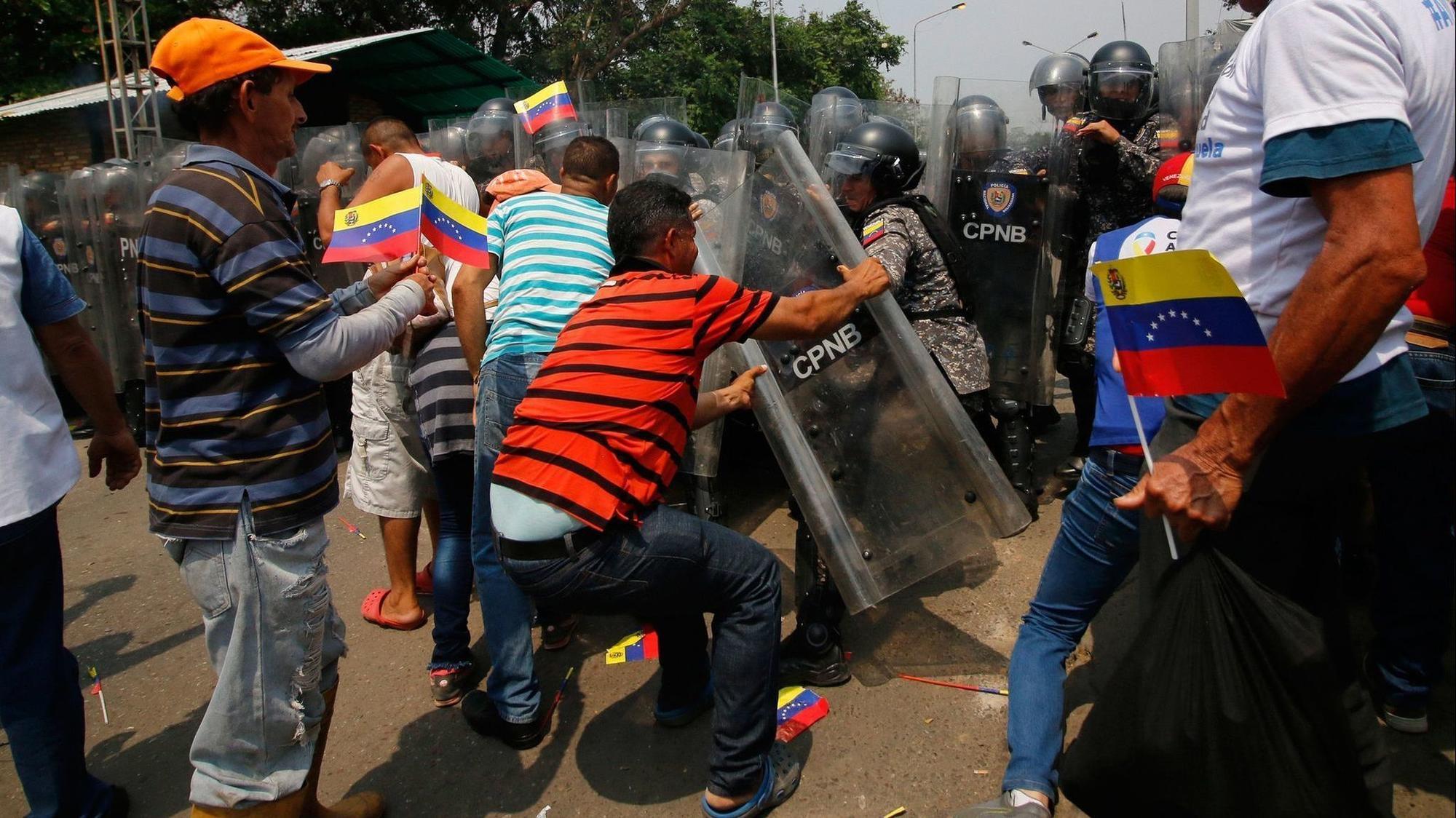 A massive effort to break President Nicolas Maduro‘s blockade of humanitarian aid descended into violence and chaos Saturday across the string of border flash points — showing both the growing defiance of Juan Guaidó and the U.S.-backed opposition but also Maduro’s willingness to fight back.

In all, 285 people were injured and 37 hospitalized on the Colombian side of the border, according to Colombia’s foreign minister. At least four were killed on the Venezuela-Brazil border after clashing with pro-government militias.

In the Venezuelan capital, Caracas, the embattled Maduro danced at a pro-government rally, mocked the United States and broke off ties with neighboring Colombia. Late in the day, Venezuelan navy vessels threatened to open fire on a ship carrying 200 tons of aid from Puerto Rico, Ricardo Rosselló, governor of Puerto Rico, said in a statement. He said he had ordered the vessels to abandon the area temporarily, decrying the threat as “unacceptable.”

Yet in a way, this day was meant to be as much about provocation as about the aid itself.

The attempt to move humanitarian aid into Venezuelan, opposition leaders hoped, would prompt members of the Venezuelan armed forces to defy Maduro by refusing to carry out orders to block delivery of aid to fellow countrymen in desperate need of food and medicine. The plan worked, to a degree: Roughly 60 members of Maduro’s military and security forces abandoned posts, denounced him and sought refuge with the opposition on Colombian soil.

But as night fell, there was no massive shipment of food and medicine headed to Venezuela’s neediest. One truckload of aid made its way into Venezuela from Brazil and several others inched across the Colombian border into Venezuela before being blocked by government forces. And there was no political resolution, with two men — Maduro and Guaidó — still claiming the presidential mantle.

The chaos was evident throughout towns on both sides of the border.

In San Antonio, just across the Simon Bolivar Bridge from Colombia, tear gas billowed and protesters responded by throwing rocks at Venezuelan forces. Then a warning cry went up: “Colectivos! Colectivos!” — the name for pro-Maduro vigilantes.

Suddenly, a group of 20 large men on motorbikes, their faces partially covered by black masks, roared into the road. They were members of the feared pro-government militias, frequently deployed by Maduro’s loyalists, and who were widely blamed by the opposition for unleashing a torrent of fear at multiple border points on Saturday.

Protesters, aid workers, volunteers and journalists began running for shelter, dashing into buildings and cars and boarding motorcycles in an attempt to escape, as the militia members opened fire.

“It was horrifying, horrifying,” said opposition politician Carlos Valero, who was present for the San Antonio attacks. “The last thing we imagined was that Nicolas Maduro was going to put out so many irregular forces. They shot at us, and the national guards threw tear gas. We didn’t expect that level of irrationality in response to humanitarian aid.”

The events spiraled close to the realm of international conflict. On the Simón Bolívar Bridge, tear gas volleys and rocks flew from both the Venezuelan and Colombian sides, with Colombian authorities arresting at least two irregular Venezuelan militiamen on the Colombian side of the border.

“#MaduroRegime has fired into territory of #Colombia,” Sen. Marco Rubio, R-Fla., who has closely advised President Trump on Venezuela, tweeted on Saturday. “Receiving reports of injuries after this attack on sovereign Colombian territory. The United States WILL help Colombia confront any aggression against them.”

National security adviser John Bolton tweeted that Maduro’s response to trucks of humanitarian aid had been “masked thugs, civilians killed by live rounds, and the burning of trucks carrying badly-needed food and medicine.” He suggested that more sanctions were coming.

Vice President Mike Pence, who will go to Colombia on Monday to give a speech reiterating U.S. support for Guaidó, also took to Twitter to show solidarity with the opposition: “Estamos con ustedes. We are with you.”

Guaidó, the opposition leader, began the day by tweeting, almost optimistically, about the mission at hand.

“Venezuela, the day has arrived in which we will take the step to enter humanitarian aid. From our borders, by land and sea, we will bring hope, food and medicines for the ones who need it the most,” he wrote. “We call everyone to go out massively to the streets in the whole country, to protest in peace at barracks, to urge the armed forces to let humanitarian aid in.”

Yet after an attack by the Venezuelan military near the Brazilian border that left two civilians dead and 11 wounded on Friday, fears mounted that the attempt to move aid into Venezuela could be marred by further violence. By Saturday morning, the Venezuelan government had temporarily closed three key border crossings with Colombia. Just before the 8 a.m. start time for the effort to try to break the blockade, a violent confrontation broke out on the Santander bridge in the western border town in Ureña — one of the crossings to Colombia ordered closed by the Maduro government.

About 200 people — a mixture of protesters seeking to bring in aid and Venezuelan workers with jobs on the Colombian side of the border — began throwing rocks at border guards, who responded with volleys of tear gas.

“They think they are the owners of Venezuela,” María Zambrano, a 46-year-old engineer who arrived in Ureña to join the aid effort, said of the guards. She said a cousin of hers with cancer cannot find medication for treatment. “But we are all united, and we will get this aid in. They won’t be able to shoot us all.”

In Venezuela, groups of volunteers and opposition leaders boarded early-morning buses, cars and motorbikes en route to the eastern Colombian border. In addition to vows of bringing in aid by sea and land — and via human chain if necessary — the opposition also planned large-scale rallies in cities nationwide to demand the admittance of international relief.

“I’m very concerned with the information we’ve received about paramilitary groups and other irregular groups already at the border with the intention to spread violence,” said opposition politician Nora Bracho. “We have no doubt that there will be violence, absolutely no doubt.”

In defiance of a ban against leaving the country, Guaidó made a secretive trip to Colombia on Friday to lead the aid effort and meet with regional leaders. He suggested the Venezuelan armed forces had helped him spirit across his nation’s western frontier.

But he was also running the risk of being barred from reentry or arrested upon return.

The attention on Saturday remained focused on the single-largest staging ground for aid in Cucuta.

Organizers in Cucuta had called for “every available Venezuelan” to turn up Saturday morning at 8 a.m. and await further orders.

Many began to awake before dawn on a rocky ground of a camp set up for them and began moving toward arranged meeting points to join the effort.

“We’re betting everything on this,” said Ricardo Justo, a 24-year-old salesman from Caracas who traveled 27 hours on a bus with a group of 30. “We’ll do whatever they tell us to.”

Air-raid sirens on bull horns awoke the camp at 5:20 a.m., rousing them for a day of action. Folk music began playing. Kleibysad Saab, a 47-year-old Venezuelan from the state of Carabobo, lead a crowd in chants of “freedom” before offering a prayer.

“No man can close the doors that God has opened,” she said. “Here we go!”

The crowd roared an amen.

In the western city of San Cristobal, about 150 people divided in four buses were stationed at one of the points where the opposition called yesterday for residents to gather to be taken to the border. But around 35 soldiers with shields and a convoy were blocking the way, telling them they had orders to only let cars pass.

Three drivers decided to order people to leave their buses because they heard vehicles were being impounded en route. About 110 people began to walk up a hill toward the border, hoping they would get a ride on the way. But they were quickly blocked by armed guards, and began shouting “let us pass, let us pass.” Within minutes they were allowed to.

“They know which is the right side,” said Julián Pozo, 54. “They are suffering too.”

Many marchers wore white shirts that read “freedom for Venezuela.”

“I want to free Venezuela from this yoke. The abuse has to end,” said Asdrúbal Castillo, a 65-year-old farmer. “This is a historical moment. It’s either now or never.”